Learning on the job 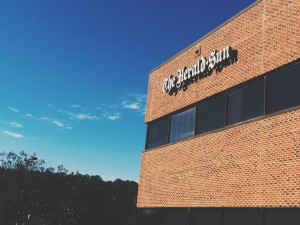 I’ve always been told to keep my blog up and running, but as we know, that isn’t something I’m good at. I thought for awhile that I’d make this a place to muse about my life as a college journalist, then as an intern and eventually as a post-grad, fully-employed journalist.

Obviously my thoughts don’t always make it into the “action” stage of life.

There was only The Herald-Sun.

I always joke that I can be a bit impulsive. I’m an organized planner that sometimes just decides to change everything. That’s how I landed at The Herald-Sun. I took all my moxie, spunk and tenacity and applied to a paper I’d only read online. Then a week later I called up the editor and asked if he got my application. The first question he asked me: “Why would a girl from Des Moines, Iowa apply for a paper in Durham, North Carolina?”

I don’t even remember what I told him. Anyway, I knew at that point that I wasn’t going to be staying in Iowa, and I didn’t really want to move back to Minnesota, so there I was – hoping to go somewhere new, somewhere exciting. And by golly, Durham has a lot of that.

Being a crime reporter has its perks – I never know what I’m going to be doing on any given day in the newsroom. And depending how you look at that, it can also be a disadvantage. I’m waiting for the worst things in life to happen – murder, mayhem and a dash of armed robberies.

This week illustrated exactly that. On Jan. 19, two bodies were found in the city. I wasn’t working so one of my coworkers had to run point on the story until I get back into the office the next day. When I got into the office about 8:45 a.m. on Jan. 20 police had already found a third body. I barely had time to take my coat off before I was out the door. Three bodies in almost 24 hours, that’s nothing anyone wants to deal with. The reporters were curious as to what happened. Were the deaths connected? What if we have a serial killer (oh please don’t let it be a serial killer)? Is it possible gang violence? We went into a press conference armed with questions, and left with minimal answers.

But when we got there, we were also given information about an alleged rape that happened at a house leased by members of a fraternity. I thought I’d left the life of reporting on Greek Life behind me when I graduated.

Whenever there is a discussion about rape allegations at a university in town there is always whispers of “Is this going to be another lacrosse situation?” No one wants to repeat the past.

But some of us have to learn it.

I was 14 when the Duke Lacrosse scandal broke. I was living in New Ulm, Minnesota. We didn’t have lacrosse teams, and I didn’t even really register what Duke was at the time. Now, at the age of 23 I have to learn the ins and outs of it. It reverberates in the culture – media and otherwise.

And there’s a lot to learn. Thank goodness I have a crew that’s been in the business since I was a toddler, or heck, even before I was born.

That’s one of the reasons why I love coming to work every day. I learn from the people who have been here since the beginning. They’re the ones who tell me things to look up, books to read, or heck even correct me when I don’t understand the roadway eccentricities of Durham.

As I get closer to a year at The H-S, I’m starting to get more confident in my abilities as a reporter. I’m learning to love my job, not just because of what I’m doing, but because of the people I’m working with.

A year in review