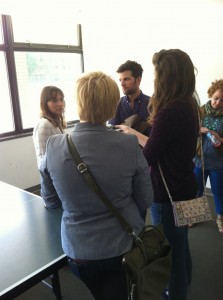 Today I was asked what my “Drake Love Story” is. You know, the story that really gets down to why I’m at Drake and why I adore the institution. It really got me thinking.

It’s taken me awhile to figure it out. Really though, it all boils down to one situation.

Time: Relays edition of the publication

Story: I was a first-year student. I was a copy editor. I had no idea what to expect when it came to the Relays Edition. I had never seen one. I had never worked on a publication as intently before. I loved every minute of it.

I was pretty low on the paper’s hierarchy at that point, and I was so okay with that. I loved being in the office at awful hours editing copy and bonding with the upperclassmen.

That office is where I fell in love with the school. Not just the school though, the students — My peers. My people. My heros.

I saw juniors in roles that I wanted. They pushed me to be better then I thought I could be. There were early morning phone calls asking about editing. There were days when I should not have been in the office but definitely was because I wanted to be there. I wanted to be pushed and to learn.

Those two months (probably more like three) I spent in that office for hours on end are still some of my most cherished memories I have from my first year at college. The advice I received from those upperclassmen is still valued to this day.

They have all graduated. It was truly sad to see them leave. Some are still in the area, others are moving to different states. They’re holding jobs that I someday hope to have. They’re still the people I look up to. They were the ones who trusted me — The scared, little first-year journalism student with no experience in covering public affairs. They trusted me to cover a huge story on campus. The advice they gave me still rings true in my mind — some of it wasn’t even necessarily advice, more so observations. 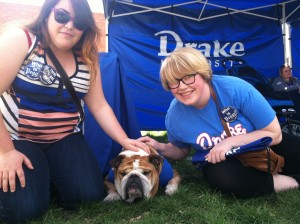 One such piece of advice that I hold so dearly to my heart was said to me by a very wise Drake alumna. After a particularly hard night of editing, she turned to me and said: “Lauren, I’m so glad to see that you’re not jaded about journalism. So many of us are already. I hope that you never become jaded.”

I still think about those days and smile. I was so sleep deprived. I was so stressed. I skipped so many classes for the greater good of journalism (and my teachers were okay with that). I was even sent home from a class after I stayed in the office all night. But, I was so happy. I always am. I’m happiest when I’m in the newsroom with the people I love.

Ending: So that’s my Drake Love story, I guess. It’s interesting to think of myself as an upperclassman. It’s so odd to think that as a sophomore, I took over the newspaper and then redesigned it after that. It’s weird to think that first-year students are looking to me as someone to guide them. To be that person who can give them advice. To be that person who influences their lives in the smallest possible ways. I hope I can only be half as great as those that impressed the love of journalism on me.

And, to the alumna who told me to not be jaded — I have yet to be jaded, no matter how much crap I’ve had to deal with. I still love every moment of the paper. Every deadline. Every misplaced comma. Every panic attack. I still love it. And to all those upperclassmen who helped me as a first-year — Thank you. You have no idea what it meant to learn from you. You were some of the best teachers I’ve had in my years at Drake.

To all those underclassmen who are looking toward me as a leader and role model — I hope I can lead you down the right path. Just remember, all bulldogs stumble and no path is smooth.